Microsoft Xbox One vs PlayStation PS4 – Pros and Cons 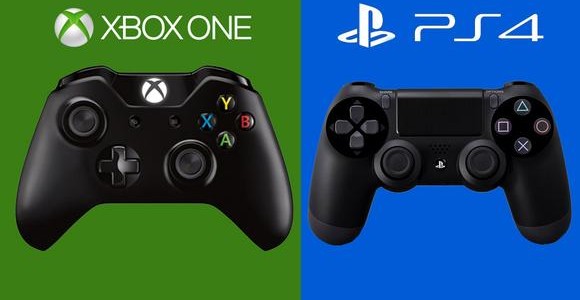 “Hey there! So you might be asking yourself,
Self,
What is better, the new Sony Playstation 4 aka the PS4 or the new Microsoft XboxOne?”
mmmmmmmmm
I’ll tell you right now it’s clear
The PS4, Hands Down, will be the champ.
and here’s why….
It’s cheaper! How cheap? The PS4 is $100 cheaper than the XboxOne. For a brokeass college student like myself, that $100 is a world of difference between eating ramen for dinner or kicking some major ass on the next Call of Duty incarnation. I mean, $100 is a lot of fucking money, honey.
Second, you don’t need to be online all the time like to play games on the PS4. Your Xbox must check in via the internet once every 24 hours, if not, you won’t be able to play games – I mean what the fuck?
Finally, Kingdom Hearts! – that is all
Anyways, the PS4 wins for me but you can make up your minds for yourself.
For full specs for both the XboxOne and the PS4 check the links below!

The PS4™ system focuses on the gamer, ensuring that the very best games and the most immersive experiences are possible on the platform. The PS4™ system enables the greatest game developers in the world to unlock their creativity and push the boundaries of play through a system that is tuned specifically to their needs. The PS4™ system is centered around a powerful custom chip that contains eight x86-64 cores and a state of the art 1.84 TFLOPS graphics processor with 8 GB of ultra-fast GDDR5 unified system memory, easing game creation and increasing the richness of content achievable on the platform. The end result is new games with rich, high-fidelity graphics and deeply immersive experiences.

Moving away from the more complicated Cell architecture of the PlayStation 3, the PlayStation 4 will feature a simpler AMD processor, in hopes of attracting a broader range of developers and support for the system. Sony also plans to place more focus on social gameplay, with incorporating a “share” button on the new controller and making it possible to view in-game play streamed live from friends. The console in general will have a strong focus with interactivity with other services and devices, including Gaikai, a cloud-based gaming service that will offer downloadable content and games, the PlayStation App, which will connect smartphones and tablets into a second screen to enhance gameplay, and the PlayStation Vita, which will be able to play a majority of the games through Remote Play.

Moving away from the PowerPC based architecture used in the Xbox 360, the console features an AMD processor built around the x86-64 instruction set. The console places an increasing emphasis on entertainment and integration with the Kinect peripheral, offering the ability to use an existing set-top box to watch live television programming (augmented by an enhanced program guide with support for voice commands), a built-in Skype client, and improved second screen support. The console also provides new functionality for use in games, such as an expanded Xbox Live service, improved Kinect functionality, cloud computing, the ability to automatically record and share video highlights from gameplay, and integrated support for live streaming gameplay online.

Initial reaction to the Xbox One has been mixed. Early reviews praised the console’s new features, while others had criticized its lack of backwards compatibility with Xbox 360 games, online connectivity requirements, mandatory integration with Kinect, and ambiguous restrictions on the resale and sharing of used games. In response to these criticisms, Microsoft announced they would be dropping most of the originally planned digital rights management and internet connection requirements